Skip to main content
Labels
Posted by Unknown May 07, 2009 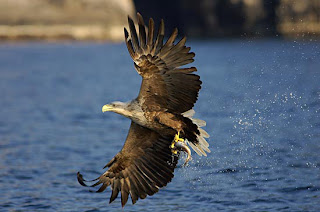 Over the past few weeks and months, many may have heard of the deaths of reintroduced birds of prey across the island of Ireland. These birds have been introduced from countries like Norway or Scotland back in 2007, but there is concern amongst conservationists that the reintroduction was in vain. The White Tailed (or Skellig) Eagle, shown above, was one such bird introduced. But, of the 15 eagles that were brought to Ireland, and specifically Kerry, 5 have been found dead, probably as a result of eating poison laden carcases put in place by farmers trying to curb pests like foxes. Similarly, in Donegal there are concerns for the re-introduced Golden Eagle and in Wicklow for the Red Kite after deaths of some of these birds earlier this year. It is very apparent that the influence of humans was a major cause of their original decline and to repeat such a catastrophic event would be horrific. The use of these poisons is illegal and must be stopped. I have witnessed the White Tailed Eagle in flight and it is one of the most beautiful birds and we should all be concerned about this horrendous practice. It is a national disgrace.
Labels: Nature Notes Opinion Pieces Today's Science News