Skip to main content
Labels
Posted by Unknown May 25, 2009

Science Fact of the Week 21 - Mars 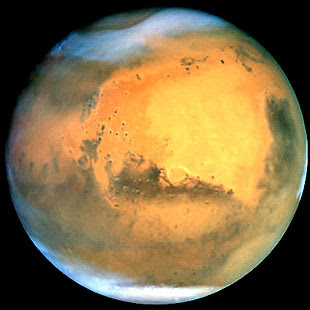 Mars is the fourth planet from the Sun. It is also the second nearest planet to the Earth and will probably be the first planet visited by humans (after Earth). There are 668 Martian days in a Martian Year. Mars has a very eccentric orbit that can vary from 249 million km to 207 million km. As a result, it also experiences seasons. The planet is named after Mars, the Roman god of war. It is also referred to as the "Red Planet" because of its reddish appearance, due to iron oxide on its surface. When it is nearest to Earth – 59 million km away – Mars can be seen in great detail even with small telescopes. The polar ice caps are visible; the southern ice cap can extend down to 50° latitude or become quite small depending on the season. There are many bright areas on the red planet e.g. 'Hellas' that are in fact deep basins on the planet's surface. There are also dark areas on the planet's surface e.g. 'Sirtis Major' (in the shape of a large 'V') that were once thought to be seas, but when the atmospheric pressure was discovered to be too low for liquid water, the dark areas were then thought to be old sea beds filled with vegetation. However all this was disproved after the first fly-by mission by Mariner 4 in 1965. Two NASA rovers, Spirit and Opportunity, have been roaming the Martian surface since 2004 (although spirit got stuck in soft soil on May 1st this year when it damaged its wheel - pictured below). 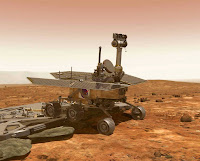 The highest known surface point on Mars is a huge volcano known as 'Olympus Mons'. It stretches 24km high above the lava plains around it and it has a base measuring 600km. Mars has an average surface temperature of about -23°C. Its atmospheric content includes 95% carbon dioxide, 3% nitrogen and 1.6% argon. Mars is not as dense or as large as Earth and has an escape velocity of 5km/sec, only enough to sustain a thin, transparent atmosphere. However, some clouds can be seen and from time to time the occasional dust storm can completely cover the Martian surface. Mars has two moons, Phobos and Deimos, both discovered in 1877 by Asaph Hall. These two moons are shaped irregularly and are probably asteroids that were caught by Mars' gravitational pull a long time ago. Phobos orbits at a distance of less than 6000 km from the surface of Mars and, with a maximum diameter of 27 km, is larger than Deimos. Phobos has been falling very slowly toward the planet at a rate of 10 km every century, because of which it will collide with Mars in forty million years. Phobos' surface is covered with craters (the largest is the 10 km-long "Stickney," which was named after Asaph Hall's wife). Deimos is even smaller than Phobos. Its greatest diameter is 15 km and it orbits 23400 km from the planet's centre and, unlike Phobos, has a stable orbit. To view some detail of the surface of mars, why not check out Google Mars at www.google.com/mars. It's very cool!
Labels: Astronomy Science Fact of the Week