Skip to main content
Labels
Posted by Unknown May 28, 2009 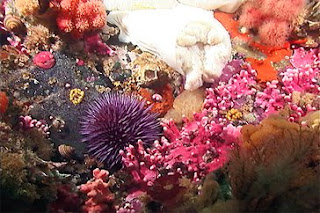 French and Irish marine biologists have found a coral reef off the west coast of Ireland. The site, which is approximately 200sq kilometres, is located on the Porcupine Bank in the Atlantic Ocean (shown on the map below) and some of the corals extend to a height of 100 m . This is one of the most pristine examples of a cold water reef ever discovered and is one of several such reefs discovered over the past few years. Coral reefs are quite common in warm water areas, e.g. Australia or the Maldives, but rare in the cold waters of the Atlantic. Cold-water reefs are important because they provide feeding grounds and nursery areas for fish including commercial species.
It has been known for quite a while that corals grow in Irish waters. Coral was first discovered off Ireland in 1869 by a Royal Irish Academy and Royal Dublin Society sponsored cruise. Until recently little more was known about this coral, and most research in our offshore waters has been by foreign ships. In the late 1960’s and early 1970’s, fishing trawlers from Dingle caught coral in their nets off the south-west coast, some of it from depths as shallow as 80-100 m. This new discovery, however, constitutes a major find and efforts are being put in place to preserve this natural habitat. Coral is composed of small primitive colonial animals. As they grow they secrete calcium carbonate, or limestone. For more information on this spectacular and important find click here to see an article on Science Daily, one of the Frog Blog's favourite sites.
Labels: Fragile Earth Nature Notes Today's Science News