Skip to main content
Labels
Posted by Unknown May 11, 2009 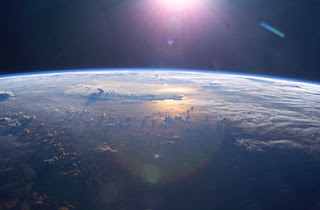 The Earth's atmosphere is a thin layer of gases that surrounds the Earth. It is composed of 78% Nitrogen, 21% Oxygen, 0.9% Argon, 0.03% Carbon Dioxide, and trace amounts of other gases. This thin gaseous layer insulates the Earth from extreme temperatures; it keeps heat inside the atmosphere and it also blocks the Earth from much of the Sun's incoming ultraviolet radiation. The Earth's atmosphere is about 300 miles (480 km) thick, but most of the atmosphere (about 80%) is within 10 miles (16 km) of the surface of the Earth. There is no exact place where the atmosphere ends; it just gets thinner and thinner, until it merges with outer space. However, it is no thicker in comparison to the layer of varnish on a typical sized globe. 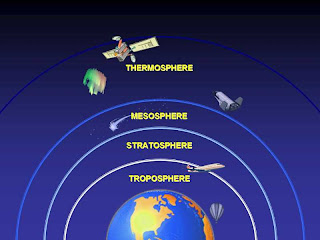 The atmosphere of the Earth may be divided into several distinct layers, as the diagram across indicates. The troposphere is where all weather takes place; it is the region of rising and falling packets of air. Above the troposphere is the stratosphere, where air flow is mostly horizontal. Planes generally fly in the stratosphere. The thin ozone layer in the upper stratosphere has a high concentration of ozone, a particularly reactive form of oxygen. This layer is primarily responsible for absorbing the ultraviolet radiation from the Sun. Above the stratosphere is the mesosphere and above that is the ionosphere (or sometimes called thermosphere), where many atoms are ionized (have gained or lost electrons so they have a net electrical charge). The ionosphere is very thin, but it is where aurora (Northern & Southern Lights - See Previous Science Fact of the Week) take place, and is also responsible for absorbing the most energetic photons from the Sun, and for reflecting radio waves, thereby making long-distance radio communication possible.
Labels: Chemistry Stuff Science Fact of the Week