Skip to main content
Labels
Posted by Unknown May 01, 2009 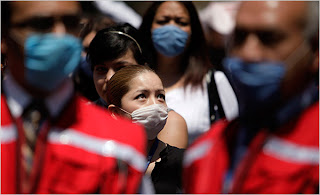 As Ireland hears of their first confirmed Swine Flu case, a man recently returned from Mexico, I firmly believe we are being a little over the top at present. The Mexican authorities have reduced their numbers of confirmed cases of Swine Flu to just 99 with only 12 deaths. There are now only 148 confirmed cases of Swine Flu worldwide, most of which will not prove fatal. Yet despite this there is almost worldwide panic. The Egyptian authorities have ordered the slaughter of 300,000 pigs, despite the fact that pigs are not thought to be linked to the disease's ability to spread at all, and especially through consumption of pork! In Iraq, three wild boars were killed in a zoo in Baghdad, despite no single case of swine flu ever being recorded amongst wild boars. People are wearing face masks in cities across the world, despite their chance of catching the virus being almost zero. But why? The media are blowing this way out of proportion. For instance, have they forgotten about swine flu's seasonal cousin. Last year, 36,000 people died, yes died, of the good old fashioned seasonal flu in the United States. In Ireland the cases were in the hundreds, in the UK thousands! In the US, that corresponds to nearly 100 deaths per day, on average. Maybe if the media were spreading the message about seasonal flu, this number could be reduced. I know there are other factors: the widespread nature of the seasonal flu virus (or viruses to be more precise), the fact that most of these deaths are amongst the elderly or weak, the limited spread of the swine flu virus. But come on! Let's not get ahead of ourselves. At the moment, normal anti flu medicines are effective against the H1N1 virus and a vaccine is probably less than a few months away from widespread production. I for one am not panicking!
Labels: Opinion Pieces Today's Science News