Skip to main content
Labels
Posted by Unknown May 06, 2009 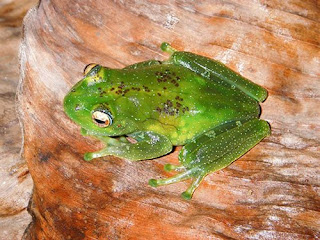 Between 129 and 221 new species of frogs have been identified in Madagascar, practically doubling the currently known amphibian fauna. The Spanish Scientific Research Council (CSIC), who carried out the study, believe the find could practically double the number of amphibians known in the world if the results are extrapolated at a global scale. The study, published in the journal "Proceedings of the National Academy of Sciences of the USA" suggests that the number of amphibian species in Madagascar has been significantly underestimated. During the past 15 years, scientists have discovered and described over 300 new frog species alone from Madagascar.
Labels: Extra Froggage Today's Science News