Skip to main content
Labels
Posted by Unknown May 22, 2009 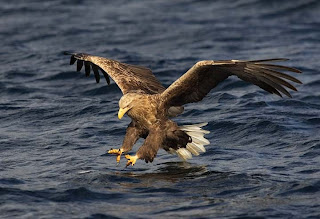 This is the first in a series of posts that will look at the native birds of prey in Ireland. There was an excellent reaction to our recent post about the poisoning of reintroduced birds around the country, and we would like to thank all those who aired their views on the matter. We will begin with the White Tailed Eagle, the majestic bird pictured in the previous post.
The White Tailed Eagle, also known as the Sea Eagle, Erne or White Tailed Sea Eagle, is a large bird of prey with long broad wings with a "fingered" effect at the outer edge of the wing. The Adult White Tailed Eagles are on average 69–91 cm long with a wingspan in the region of 182–238 cm. Adults have a brown plumage with a paler yellowish-brown head and neck. Their tail is wedge shaped and is pure white in adults (hence the name). Younger birds' plumage vary from brown to black. These magnificent birds predominantly are found along sea coasts and large freshwater lakes and rivers. They feed on fish, waterbirds, carrion and offal. They tend to build their nest on cliff-ledges or tall mature trees. Females (who are significantly larger than the males) lay on average, 2 eggs from February to April. These eggs are incubated for up to 40 days and the chicks remain in the nest for a further 10 weeks or so.
White-tailed Eagles were once widespread in Ireland, although apparently largely confined to western coasts. They died out after being trapped, shot and poisoned in the 19th century. By 1894 there were still one or two pairs in Mayo and Kerry, but by 1900 the species was gone, the last documented nesting being in 1898. In 2007, in an effort to re-establish the species in Ireland, fifteen Norwegian birds were introduced into Killarney National Park in 2007. As mentioned previously, some of the reintroduced birds have been poisoned and only 10 of the original 15 reintroduced birds now survive. White Tailed Eagles are sometimes found in Ulster, having flown across from Scotland. Europe currently has nearly 2000 breeding pairs. In Scotland, where a reintroduction programme began in 1975, there are now 33 breeding pairs. One interesting story about the White Tailed Eagle is that on the Shetland Islands, fishermen believed that as soon as a sea eagle appeared fish would rise to the surface, belly up; this led to some fishermen using eagle fat, smeared on their bait, to increase their catch. A truly majestic bird of prey.
Labels: Fragile Earth Ireland's Birds of Prey Ireland's Fauna