Skip to main content
Labels
Posted by Unknown May 10, 2009 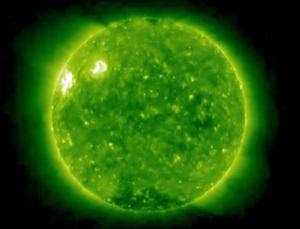 The sun's new solar cycle, which is thought to have begun in December 2008, will be the weakest since 1928, according to a panel of international experts, although some of whom maintain that the sun will be more active than normal. But even a mildly active sun could still generate its fair share of extreme storms that could knock out power grids and space satellites. Solar activity waxes and wanes every 11 years. Cycles can vary widely in intensity, and there is no foolproof way to predict how the sun will behave in any given cycle. While we are predicted a slow period in the sun's activity over the next year or so, i.e. fewer sun spots, it is predicted that the cycle will reach its peak around 2012.

A massive solar storm could cause enormous economic disasters, as many satellites could be damaged by increased solar radiation. This could lead to brighter and more spectacular aurora but that would be the only positive. The last major solar storm was in 1859 and it damaged a large amounts of telegraph wires and caused fires in North America. However, the advent of technology since then means there is more at stake if a similar electrical storm occurred. Above is a picture of two large (about the size of earth) sun spots that appeared on the Sun's surface this week. These are caused by massive "knots" in magnetic energy. For more information on the sun, click here. For more information on the new solar cycle, click here.
Labels: Astronomy Today's Science News