Skip to main content
Labels
Posted by Unknown May 09, 2009 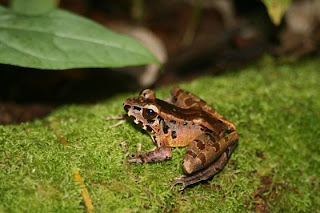 UCLA scientists report on the only known frog species that can communicate using purely ultrasonic calls, whose frequencies are too high to be heard by humans. Known as Huia cavitympanum, the frog lives only on the Southeast Asian island of Borneo.

Ultrasounds are high-pitched sounds more than 20 kilohertz (kHz) in frequency, which exceeds the upper limit of sounds detectable by humans and is far higher than the 5 to 8 kHz frequencies most amphibians, reptiles and birds are capable of hearing or producing. Key parts of the ear must be specially adapted to detect ultrasounds. These frogs can hear sounds up to 38 kilohertz, the highest frequency any amphibian species has been known to hear, the scientists report. Humans can hear up to about 20 kHz and typically talk at 2 or 3 kHz. While most of the more than 5,000 frog species worldwide have eardrums that are flat on the side of the head, Huia cavitympanum has eardrums recessed in the side of the skull, similar to mammals.
Labels: Extra Froggage Today's Science News