Skip to main content
Labels
Posted by Unknown May 25, 2009 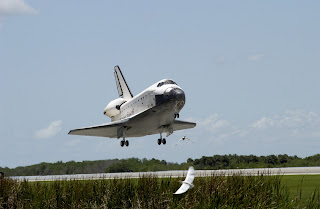 The space shuttle Atlantis landed safely on Sunday but not at the Kennedy Space Centre as planned. The shuttle touched down at Edwards Air Force Base in California, returning from a historic mission to repair the Hubble Space Telescope. Thunderstorms in Florida kept the shuttle from landing at its home spot on Friday and ended flying across the country to Kennedy Space Center. NASA called off all landing attempts for Saturday because of thunderstorms in Florida. Thunderstorms also thwarted Friday's landing attempts. Atlantis Commander Scott Altman and his six crewmates wound up their Hubble repair mission, which began 12 days ago. It was NASA's last visit to the 19-year-old observatory. The $1 billion overhaul should keep the telescope working for another five to 10 years.
Labels: Astronomy Space Exploration