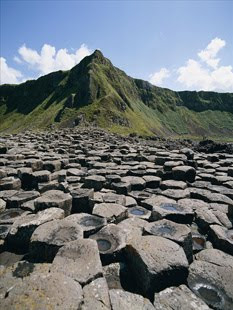 The Giant's Causeway on the Co. Antrim coast in Northern Ireland was formed during the early Tertiary period some 62 - 65 million years ago, during a major episode of igneous activity, when the northern Atlantic Ocean was beginning to form. Three basaltic lava outflows occurred - known as the Lower, Middle and Upper flows. The hexagonal columns of the causeway occur in the middle basalt layer. The same formation can be seen at Staffa in Scotland (Fingal's Cave) and also occurs in the the surrounding landscape of North Antrim and in many other parts of the world.
The causeway area would have been situated much further south at that time, experiencing hot and humid conditions. This came about due to the fact that the Earth's crust is made of moving 'tectonic' plates, which float on the semi-molten aesthenosphere below. These plates move slowly, but over millions of years they can travel thousands of miles. The fascinating pattern that we see in the causeway stones formed as a result of rock crystallization under conditions of accelerated cooling. This caused the rock to shrink, and the resulting cooling joints produced the distinctive angular columns.
Of course, there is another explanation for the formations. Legend tells of Fionn MacCool, a local giant, who built the causeway as a means of travelling accross to Scotland to fight a rival giant. I visited the Giant's Causeway over the summer holidays and I would recommend a visit to anyone. The Antrim coast truly is an area of stunning natural beauty.
Labels: Geology Teacher Travels