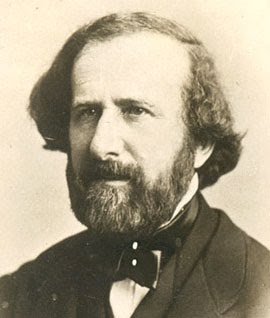 Armand Fizeau was born in Paris on this day, 23rd September 1819, and was to become one of the foremost physicists of his time. Following in his father’s footsteps, he initially studied medicine, but eventually ended up in the Paris Observatory and the College de France – a centre of innovative research since the sixteenth century.

In 1849 Fizeau became the first person to accurately measure the speed of light across the surface of the Earth – shining a beam of light through the teeth on the edge of a rotating wheel to reflect off a mirror placed 8 km away (on top of the hill of Montmartre) such that the distance moved by the wheel in the time taken for the light to return could be used to calculate the light’s speed. Fizeau also discovered that light travels faster in air than in water, which added weight to the theory that light travels as a wave rather than as little ‘corpuscles’. Working with Foucalt (of “Foucault’s pendulum” fame), Fizeau took the first clear photographs of the sun’s surface; and investigated many aspects of the nature of infra-red radiation and light – correctly relating the ‘red shift’ exhibited by stars to their velocity (i.e. the Doppler effect). The fruitful collaboration with Foucault apparently came to an end after a quarrel in 1850, although working with E. Gounelle in this year he measured the speed of electricity.

Subsequently Fizeau experimented with the use of a capacitor to increase the effectiveness of induction coils (devices which convert low voltage direct current into high voltage alternating current), and with the thermal expansion of solids. He was elected a member of the French Académie des Sciences in 1860, and was appointed Superintendent of Physics at the École Polytechnique in Paris in 1863. After a long illness Fizeau died at the age of 76, at the champagne town of Venteuil, east of Paris, on September the 18th 1896.

In a storm we see a flash of lightning slightly before we hear the associated rumble of thunder because light travels faster than sound. Light is part of the electromagnetic spectrum, along with radio waves, microwaves and gamma rays – and indeed nothing can travel faster than these electromagnetic waves. We now know that, in a vacuum, they travel at 299,792,458 m/s (about 700 million miles per hour).
Labels: On This Day People in Science Physics Stuff