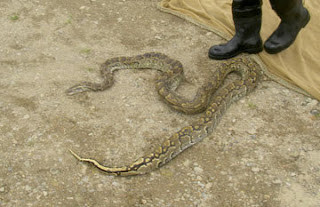 Fishery Officers making a routine inspection in the River Slaney, near Enniscorthy yesterday found something slightly unexpected, a 10 foot long African Rock Python. In case you might have forgotten, there are no native snakes in Ireland, so this animal must have been someones pet. The snake is believed to about 10 years old and had died recently. These snakes are known to be very aggressive and can live without food for up to a year. The African Rock Python is a large snake more at home on the Savannah which kills prey by squeezing it to death. Its usual diet as an adult in the wild is small mammals such as antelope but it can live on rats and rabbit.
Labels: Today's Science News