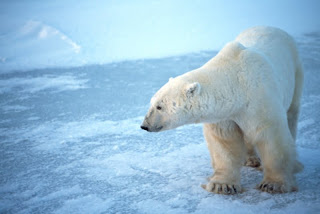 The polar bear Ursus maritimus or the "sea bear," evolved about 200,000 years ago from brown bear ancestors, although the polar bear has a more elongated body and a longer skull and nose. The polar bear is superbly adapted for survival in the far north. The polar bear's legs are stocky and the ears and tail are small. However, their feet are very large to distribute load when walking on snow or thin ice and to provide propulsion when swimming; they may measure 30 cm across in an adult. Polar bears have superb insulation with up to 10 cm of blubber (fat) under their skin. Polar bear fur consists of a layer of dense underfur and an outer layer of guard hairs, which appear white to tan but are actually transparent. The polar bear has an extremely well-developed sense of smell, being able to detect seals nearly 1.6km away and buried under a metre of snow.
Polar bears can be found throughout the Arctic. The five "polar bear nations" where the ice bears are found include the U. S. (Alaska), Canada, Russia, Denmark (Greenland), and Norway. Polar bears are the world's largest land predators. They top the food chain in the Arctic, where they prey primarily on seals. Adult male polar bears weigh up to 700 kg, with females weighing considerably less. The largest polar bear on record, reportedly weighed 1,002 kg. Although most polar bears are born on land, they spend most of their time at sea, hunting on the ice.
Polar bear numbers are currently stable but many scientist believe that their numbers could decrease by as much as 30% by 2050, mainly due to the threat of global warming. Biologists now estimate that there are only 20,000 to 25,000 polar bears left in the world. Polar bears depend on the sea ice for hunting, breeding, and in some cases to 'den'. As the climate gets steadily warmer, the summer ice begins to retreat further in the Arctic circle, thus reducing the area available for polar bears to hunt. Polar bears are currently listed by the World Conservation Union as a "vunerable species".
Labels: Nature Notes Science Fact of the Week