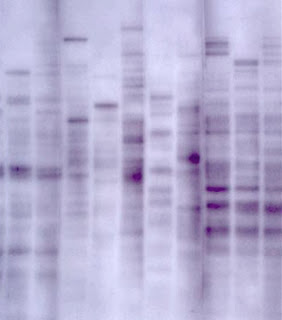 Today, in 1984, Sir Alec Jeffreys produce the first DNA 'fingerprint'. It was discovered by accident in England during work on tracing genetic markers in families. Jeffreys quickly realized this could be used as a basis for individually identifying people, as everyone has a unique genetic DNA profile (with the exception of identical twins). DNA fingerprinting uses this fact to identify or eliminate suspects in criminal cases and for identifying human remains. It is also used to resolve paternity and immigration disputes, and can be applied to non-human species, for example in wildlife forensic investigations. The first use of DNA fingerprinting in criminology was in the Enderby murder case in Leicester in 1986, which proved the main suspect innocent and subsequently helped to identify the real murderer.
Click here to read a previous Frog Blog article on DNA Fingerprinting.

Labels: Forensics On This Day People in Science