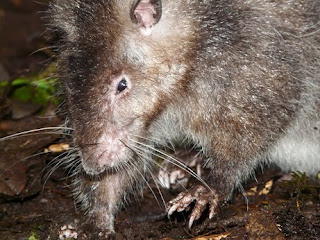 A new giant species of rat has been found in a the forests of Papua New Guinea. The 3 foot long rodent, around 5 times the size of a typical sewer rat, was actually quite docile, with a woolly, silvery fur. The discovery of this new rat species was a result of the first formal scientific expedition based around the fantastic BBC One program Lost Land of the Volcano, which was filmed between January and March of this year. The expedition unearthed 40 potentially new species, including a lost Bird of Paradise .
Labels: Nature Notes Today's Science News