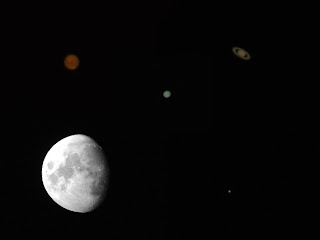 Today in 2040, the first visible conjunction during the 21st century of the crescent Moon with the five naked-eye visible planets - Mercury, Venus, Mars, Jupiter and Saturn - will occur. They will be seen clustered within a small distance of each other in the early evening sky. This event occurs once every 57 years, on average but occurred most recently in May 2000, but the Moon and the same five planets were lost to view because of the glare of the Sun from among them. However in 2040, the conjugation will occur well to the east of the sun and the planets will be clearly visible in the night sky. Set your alarm now!
Labels: Astronomy On This Day