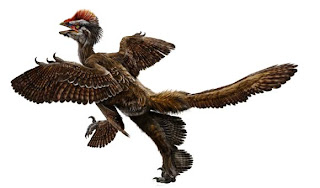 A newly discovered, profusely feathered dinosaur may help scientists gain further understanding of bird evolution and how they first took to the air. The nimble creature, which stood about 28 centimeters tall at the hip, is the oldest known fossil to have feathers and is estimated to be between 1 million and 11 million years older than Archaeopteryx, the major link between birds and reptiles.

Several fossils of the creature, which has been dubbed Anchiornis huxleyi, have been unearthed in northeastern China, a group of scientists reported recently. The rocks containing these feathered fossils were laid down as sediments between 151 million and 161 million years ago. For more information on this story click here.