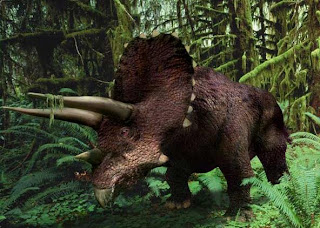 At over nine metres in length, Triceratops horridus was among the largest ceratopsians (dinosaurs with horns and frills) and one of the last to become extinct. Its name means "three horned face" (although not all Triceratops discovered had three horns). Most had a small horn on their nose and two large horns on their brow. Triceratops was a herbivore, which means it only ate plants. It made up the bulk of the plant eating population just before the end of the Cretaceous Period, and its remains commonly occur in rocks representing areas that used to be coastal lowlands. Its head, sometimes as much as three metres long, was the largest ever possessed by a land animal. It had large eyes but a small brain for its overall size. It is believed that Triceratops was not the brightest animal ever to have lived although it was probably quite feisty. Many specimens have bones damaged in combats with rivals or predators. The world in which Triceratops lived did not contain any of the 'flowering plants' (Angiosperms) which dominate so many of our environments today, and Triceratops would probably have grazed on cycads and ferns. Animals that lived at the same time as Triceratops included Tyrannosaurus (click here to see previous Frog Blog post), one of Triceratops' main predators.

The first Triceratops remains were discovered near Denver, Colorado, in 1887, when they were identified as the remains of a recently extinct species of buffalo.