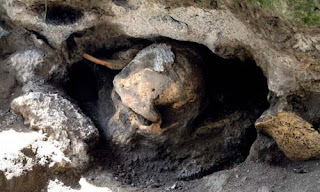 New research suggests that a key stage in human evolution may have taken place on the fringes of Europe and not in Africa as has generally been thought. Fossils of Homo erectus, an ancient human relative, have been discovered in Georgia dating from 1.8 million years ago. Palaeontologists have unearthed remains of five of the primitive humans, suggesting that some of our oldest ancestors lived in the region at the time. These partial skeletons, which represent the earliest humans discovered outside Africa, challenge the theory that our ancestors evolved entirely on that continent and only left about 60,000 years ago.

The skulls and limb bones found at Georgia in 1999 and 2001 raise the possibility that Homo erectus, a forerunner of modern humans, evolved in Europe or Asia and later spread back to Africa. A fifth well-preserved skull, the most complete yet, has recently been discovered at the site and promises to give yet more information on the individuals living there. The Dmanisi fossils, which have been identified either as Homo erectus or a new species Homo georgicus, have already shown that ancient hominids began to leave Africa at least 1.8 million years ago, pushing back the accepted date for the first exodus from the cradle of humanity by several hundred thousand years.

For more information on this extremely interesting story can be found by clicking here.
Labels: Archaeology Palaeontology Today's Science News