Science Fact of the Week 28 - The Moon 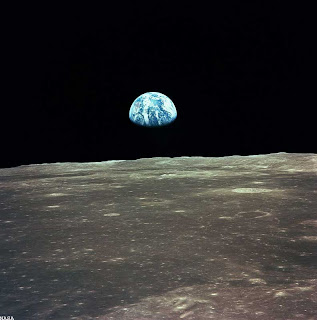 The moon is Earth's only natural satellite, and is a cold, dry orb whose surface is studded with craters and strewn with rocks and dust. The moon has no atmosphere, in other words there is no air on its surface. Most scientists believe that the moon was formed after the Earth collided with a Mars-sized object, early in its history around 4,500 million years ago. This caused a big chunk of the Earth's structure to break off and go into orbit around the Earth. This catastrophic collision occurred just about 60 million years after Earth first formed.

The moon is approximately 384,000 km from Earth on average, and it orbits around the Earth once every 28 days. As the moon orbits it also rotates on its own axis so that the same side of the moon always faces the Earth. The moon's mass is about 1/81 of the Earth's mass but its gravitational force is about 1/6 that of the Earth. The temperature on the Moon ranges from daytime highs of about 130°C to night time lows of about -110°C. On the moon, the sky always appears dark, even on the bright side (because there is no atmosphere). Also, since sound waves travel through air, the moon is silent; there can be no sound transmission on the moon.

The first people to set foot on the surface of the moon were Neil Armstrong and Buzz Aldrin (on NASA's Apollo 11 mission, which also included Michael Collins) on July 20, 1969. Apollo 12-17 continued lunar exploration with the last person setting foot on the moon in 1972. NASA plans to return to the moon by 2018.
Labels: Astronomy Science Fact of the Week