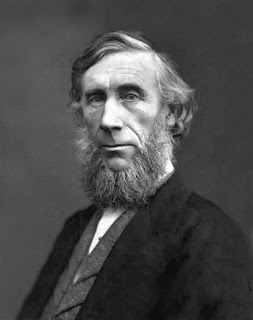 John Tyndall was born in Leighlinbridge, Co. Carlow in 1820, into a Protestant family of small landowners. His father, a man of some intellect, ensured that John received a good elementary education. He left school at 17 well grounded in mathematics, surveying and English. After a spell working with the Irish Ordinance Survey he took up a place as a teacher in Queenswood College Hampshire. He later completed a PhD in magnetism with Robert Bunsen (of the Bunsen Burner fame) in Hamburg. In 1853 he became Professor of Natural Philosophy at the Royal Institute, becoming Superintendent of the R.I in 1862, succeeding Michael Faraday. He became renowned for his public speeches, well capable of describing complex scientific terms in simple language people could understand.
John Tyndall was one of the most important scientists of the 19th Century. He made important contributions in physics, atmospheric science and geology and he was also the first to successfully answer the question "Why is the sky blue?". Tyndall was an inventor as well as researcher. He invented the fireman's respirator and improved on the fog horn, but his most important invention was his "light pipe", which he originally constructed using just a torch and a bucket of water. The modern version of this "light pipe" is the gastroscope, which is used in hospitals today to view the inside of a patient's stomach. Tyndall's "light-pipe" eventually led to the development of fibre optics. When not in the lab, he loved to study glacier forms in the Alps. He climbed Mont Blanc several times and eventually became the first person to climb Weisshorn in 1860. In the same year, he published a book on his adventures called "Glaciers of the Alps".
In his lifetime, Tyndall also made important contributions to thermodynamics, magnetism, electricity, telecommunications and electronics. As an educationalist he influenced the direction of science teaching at university and school levels. A truly great Irish Scientist.
Labels: Famous Irish Scientists People in Science