Science Fact of the Week 25 - The World's Smallest Frog

We're back and to kick start the new school year, we'll have our 25th Science Fact of the Week. And because it is the first one after a nine week break, we had to make it a Frog Fact! Welcome back to everyone and let's hope the Frog Blog has a good year in 2009 / 2010! 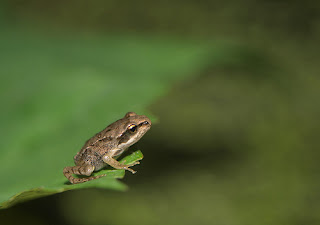 There is considerable argument about which is the smallest Frog in the world, but most scientists agree now that the award goes to the Brazilian Gold Frog (shown above). Adult Brazilian Gold Frogs measure only 9.8 millimetres. Its scientific name is Brachycephalus didactylus and it is found only in the forests around Rio de Janeiro. The total population is difficult to ascertain, as it is so small, but it is believed to be quite common. However, due to deforestation, the population is under threat. The Gold Frog is found on the forest leaf-litter in primary and secondary forests, where it also lays its eggs. Coming in a very close second is the Monte Iberia Eleuth. This little fella is found in a mountain range in Cuba. It is the smallest frog in the Northern Hemisphere and some adults can be smaller than the Gold Frog. The Monte Iberia Eleuth was only discovered in 1996 and very little is known about its habits. If you want to find out about the world's largest frog, click here to see a previous Science Fact of the Week. 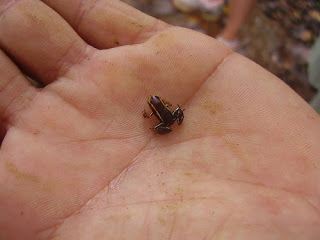