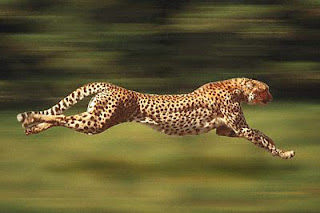 The Cheetahs is without doubt, the fastest land animal on the planet, capable of reaching a whopping 70 mph. However, the cheetah can only run at this speed for approximately 200 - 300 metres, so it's a sprinter and would not do well in the marathon. Why would a cheetah need to be able to run so fast? Well, the only animal that comes in a close second to the Cheetah's amazing speed is its favourite prey, the gazelle. In order to catch up with a meal that's as swift as the wind, the cheetah had to evolve to develop the ability to run as fast, or faster than the gazelle, or face starvation.

The Cheetah is built for speed. It has long, slim, muscular legs, a small, rounded head set on a long neck, a flexible spine, a deep chest, special pads on its feet for traction and a long tail for balance. It is also the only cat that cannot retract its claws, an adaptation to help maintain traction like studs on football boots. Cheetahs usually prey on small antelopes such as gazelles or impala, but also hunt small mammals and birds. The cheetah gets as close to the prey as possible, then in a burst of speed it tries to outrun its prey. Once the cheetah closes in, it knocks the prey to the ground with its paw and suffocates the animal with a bite to the neck. Once a cheetah has made a kill, it eats quickly and keeps an eye out for scavengers—lions, leopards, hyenas, vultures and jackals will steal from this timid predator. Unlike most other cats, the cheetah usually hunts during daylight, preferring early morning or early evening.
Below is a video of a Cheetah chasing a Gazelle! Amazing.
Labels: Nature Notes Science Fact of the Week