The Variety of Life by Max Kavanagh 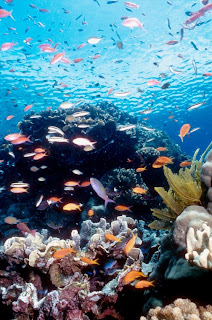 Everywhere we look on this planet there is life in some form or another, whether it is microscopic bacteria or a huge killer whale. There is thought to be over 100,000 trillion living things on Earth and approximately 20 million different species. All of these life forms are divided up into five separate groups ('Kingdoms') which contain every form of life known to man. These groups are; Monera, Fungi, Protista, Plantae and Animalia. However, at the moment there is confusion as to whether “viruses” are actually living things as not all contain DNA (but a close relative called RNA), and they are not made of cells. Each different group is classified according to their structure. The group Monrea contains all bacteria, Fungi contains fungi (!), Plantae contains every plant on the planet, Animalia contains every animal, while the group Protista contains everything that is left, things which don’t quite fit into any of the other groups. The study of the classification of living things is called taxonomy.

Animals that live on the Earth today did not walk the Earth in time past; likewise animals that once walked the Earth are now extinct. This is due to evolution. The way that evolution occurs was explained by Charles Darwin when he compared the differences in species in the Galapagos Islands and Patagonia in Argentina. In evolution an organism may change over time in accordance with its surroundings, this is what Darwin suggested. Many species have changed significantly over many thousands and millions of years, and have even changed into completely different species. For example our own species Homo sapiens, are the descendants of the species Homo erectus. This is true for every species on Earth. Many species have also become extinct e.g. the dodo and, further back in time, the dinosaurs. It is thought that every living thing is descended from one form of bacteria, similar to those which still live today.