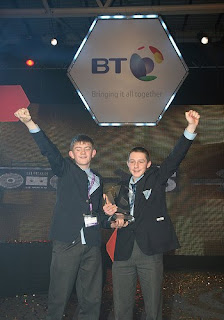 The Frog Blog would like to congratulate Kinsale Community School pupils John D. O’Callaghan and Liam McCarthy on achieving the top prize at the EU Young Scientist Contest. On Monday evening, the two 14-year-olds, who won the overall prize in this year's BT Young Scientist & Technology Exhibition were presented with a cash prize of €7,000 and trophy at the awards ceremony in Paris. The project, entitled The Development of a Convenient Test Method for Somatic Cell Count and it's Importance in Milk Production, aimed to produce a cheap and efficient way for farmers to detect infection in milk cows which, since winning the BT Young Scientist award, has had the agri-science sector sitting up and taking notice.
The judges in the BT Young Scientist and Technology Exhibition described Liam and John’s milk testing project as "utterly practical and brilliant in its simplicity." The students had deduced that if a small amount of washing-up liquid was mixed with a fresh sample of milk, the mixture becomes progressively more viscous as the somatic cell content of the milk rises. The project also won them a special award from the Patents Office, for a project which best demonstrated the use of technology in new or improved applications, enhanced efficiencies and clever innovations.

This highlights yet again the fantastic standard at the BT Young Scientist Exhibition every year. This event is a great advertisement for the wonderful science teachers and pupils in this country. Well done lads.
Labels: Today's Science News