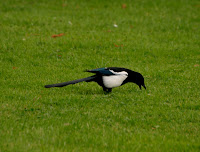 Magpie (Pica pica) This is one of the more striking members of the crow family and is a native of most of Europe. Its black and white plumage is striking and the final touch is the iridescent blue/green bars on its wings. Its long tail is also attractive. Its behaviour is however not as attractive as its plumage, since it is a scavenger collecting bright objects to adorn its nest. It has even worse habits: stealing both eggs and young of birds and anything else that comes to hand. Their raucous calls early in the morning are also annoying. Their nest is a hollow dome of twigs usually in a large bush or small tree.
Labels: Birds Wildlife of St.Columba's