Scientists Put Their Finger On Why Early Humans Slept Around!

This article appears in today Irish Times and is written by friend of the Frog Blog Dick Ahlstrom, the Irish Times Science Editor. It has been reproduced here with permission from the author. 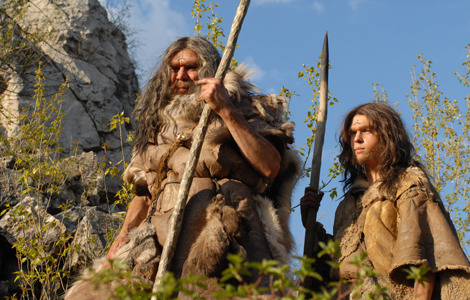 Early humans were a promiscuous lot, getting into rows and sleeping around. Evidently it all comes down to the length of your fingers, according to fossil research published this morning.

Our distant cousins the Neanderthal were similarly pushy when it came to matters sexual. The scientists from the universities of Liverpool, Oxford, Southampton and Calgary could not comment on whether this aggression manifested itself in the old “hit them over the head with a club” approach when forming meaningful relationships.
They were, however, able to draw conclusions about ancient human behaviour by measuring finger lengths from fossilised remains. Details of their work are published in Proceedings of the Royal Society B.
Whether our ancient ancestors went for monogamy or polygyny comes down to the length of their fingers, more particularly the index and ring fingers.

The sex hormones are thought to affect finger, toe and reproductive system growth and development while in the womb, stated Dr Emma Nelson, from Liverpool’s School of Archaeology, Classics and Egyptology.
The ring finger in particular grows longer in the presence of high levels of sex hormones. If there were lots of hormones about, the ring finger would grow longer than the index finger. If hormone levels were lower then the ring and index fingers would be more equal in length.
When the fossil fingers were measured, the early human, Neanderthal and early apes all had longer ring fingers, indicating they had been reared in a hormone-rich social environment.
Having too much male hormone (testosterone) about also means the social exchanges would have been marked by high levels of aggression and promiscuity, the authors write.
The researchers looked at modern primate species and they all had this long ring finger characteristic and with it the tendency to be promiscuous, Dr Nelson said. This gave the researchers confidence to predict the social behaviour of extinct apes and our ancestors on the basis of finger lengths.
Early humans had all the signs of being promiscuous but there were exceptions. One member of the human lineage Australopithecus – dating from three to four million years ago – had near equal ring and index finger lengths, implying it took a monogamous approach to relationships.
Modern human finger lengths imply the same, that we tend towards monogamy. You might find it difficult not to sneak a look at your partner’s hands though, just in case.