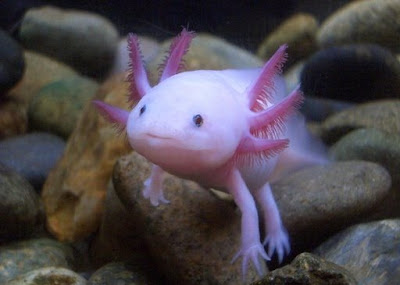 The Axolotl is a species of salamander exclusively found in central Mexico, mainly in Lake Xochimilco and Lake Chalco. The axolotl, unlike their other Mexican mole salamanders cousins, do not undergo metamorphosis so remain aquatic and gilled. Amazingly the axolotl can regenerate lost limbs so biologists are keen to study them closely.
A sexually mature adult axolotl, at age 18–24 months, ranges in length from 15–45 cm, although a size close to 23 cm is most common and greater than 30 cm is rare. Their heads are wide, and their eyes are lidless. Their limbs are underdeveloped and possess long, thin digits. Males are identified by their swollen back end lined with papillae (nipple like structures), while females are noticeable for their wider bodies full of eggs. Axolotls have barely visible teeth, which would have developed during metamorphosis. Currently there are few axolotls living outside of captivity as their natural habitat has been increasingly polluted resulting in their populations declining to almost none. They are truly one of the world's weirdest and most wonderful animals!
By Pia Klippgen, Form IV
Labels: Weird and Wonderful Animals

Anonymous said…
That is by far the MOST adorable salamander ever! Hopefully their numbers start to grow, it would be a shame to lose these forever.
5:39 am