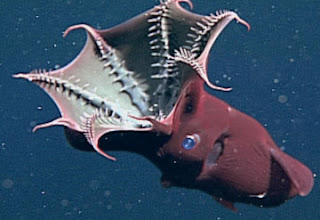 The Vampire Squid (Vampyroteuthis infernalis) was first discovered in 1903 and was mistaken for an octopus it has large fins at the top of its body that resemble ears. These fins serve as its primary means of propulsion as it literally flies through the water by flapping these fins. As with other squid, it can also use jet propulsion to move by expelling water through a specialized siphon jet located just under its mantle. It grows to the length of 6 inches long. It is found in the temperate and tropical oceans, deep down below 700 metres, meaning it lives in some of the most oxygen deprived areas of the sea. When it is scared it does not eject ink like many octopus, but a big cloud of mucus containing orbs of blue lights which can last up to 10 minutes! Another truly weird yet wonderful animal.
This post was written by Nicole Cosgrove, Form IV
Labels: Junior Frog Blog Reporters Pupil Work Weird and Wonderful Animals