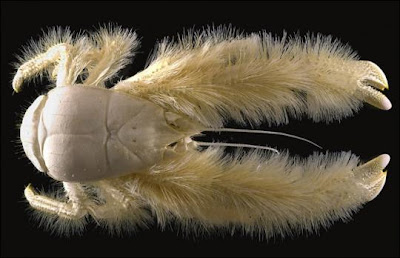 The Yeti Crab (Kiwa hirsuta) was first found in the South Pacific Ocean as recently as 2005. This rare crustacean is a decapod (ten footed animal) and is approximately 15cm long. It is recognisable for its soft white fur that covers it’s thoracic legs and claws, hence giving it the nickname the “yeti crab”. Because of it's unusual features the species is classified in a new genus and family (Kiwaidae). Their eyes are extremely small and they lack any pigment, therefore is thought to be blind. The bizarre creature lives very deep down in the ocean near hazardous hydro-thermal vents and so, in order to protect itself from poisonous toxins, the "fur" on their pincers house filamentous bacteria which help purify the hydrothermal water in which it lives.
This piece was written by Form IV pupil Kezia Wright.
Labels: Weird and Wonderful Animals