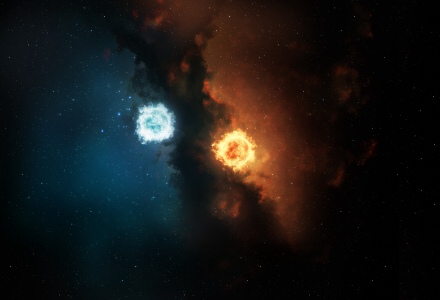 Atoms of antimatter (antihydrogen to be precise) have, for the first time, been successfully produced and trapped by CERN scientists, including two from Ireland. It is the trapping of these particles that is most significant as antimatter particles have been produced before but instantly annihilate when they come into contact with "normal" matter. Antimatter is a fundamental particle of regular matter with its electrical charge reversed. The common proton has an antimatter counterpart called the antiproton. It has the same mass but an opposite charge. The electron's counterpart is called a positron.
The team of scientists in CERN produced 10 million antiprotons and 700 million positrons during their experiments and from that were able to successfully stabilise 38 stable atoms of antihydrogen, which lasted on average just two tenths of a second each. The antimatter particles were trapped within a strong "magnetic" bottle - with the particles held in place using magnetic fields. While this doesn't seem like a very long time (and it isn't) it has allowed the team of scientists make some initial research into their properties. The team now hope to continue their work and make more stable atoms to further study these elusive particles. All in all though, this is an extremely important step in realising the potential of antimatter and has been greeted with great excitement from the scientific community. For more information on antimatter read a previous post here.