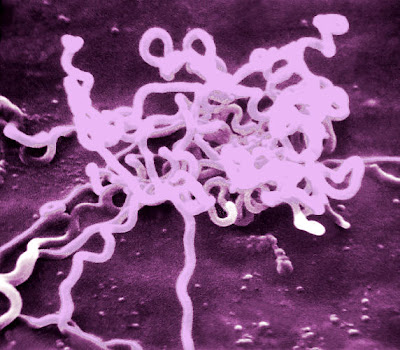 Syphilis is a sexually transmitted disease of humans which is caused by the spirochaete (spiral shaped) bacterium Treponema pallidum. The bacterium is transmitted in bodily fluids and can also be passed from mother to child in the late stages of pregnancy.
Treatment with antibiotics is now relatively straightforward, particularly if the disease is caught early – but in the past syphilis seems to have been endemic in many urban societies, at least from the 16th Century onwards. The first major epidemic to be recorded occurred in 1495, amongst French soldiers fighting for Charles the VIII in Naples.
In 1492 the Genoese explorer Christopher Columbus had made the first of his 4 journeys to America, and the timing caused some to suspect an American origin for the disease in Europe. Recent analysis of bones from the London graveyard of St Mary Spital, by Brian Connell from the Museum of London, has shown that Syphilis was in fact rife in England long before Columbus’s voyage. Skeletons which have been carbon dated to the 13th Century show clear signs of syphilitic bone lesions.


One of the skeletons belongs to a child who would have been blind, bald and had teeth that grew at a 45 degree angle through its jaw because of the disease. The child died when he was about 10 years old.
﻿﻿﻿﻿
﻿﻿﻿﻿There are 3 main stages of the disease, and in the first phase ulcers called ‘chancres’ develop at the point where the bacteria entered the body – some 2 to 4 weeks after infection. Chancres are usually painless, and slowly heal of their own accord after about 6 to 8 weeks.
The next phase of the disease usually follows-on some weeks afterwards and lasts for about 2 years. This may involve fevers, skin rashes, sore throat and other disorders; but may also be relatively unobtrusive. This is the most infectious stage of the disease.
The final, most dangerous phase of the disease may follow-on immediately or be delayed for up to 10 years. Symptoms include: heart disease, blindness, bone defects, partial paralysis, madness and death.
Labels: Archaeology Forensics Human Body Medicine