A new series of posts begins, focusing on some of the world's weirdest and most intriguing members of the animal kingdom. First up is from Form IV pupil Hamish Law on the Angora Rabbit. 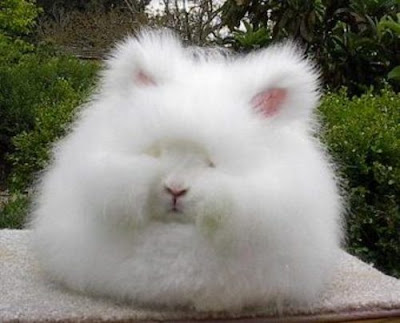 The Angora rabbit is a breed of rabbit noted for its long, soft hair. The Angora is one of the oldest types of tamed rabbit, originally from Ankara, Turkey. The rabbits were popular pets with French royalty in the mid 1700s, and they then began to spread to other parts of Europe by the end of the century. They are bred largely for their long fluffy wool, which is removed by plucking (ouch) or by shearing. There are many individual breeds of Angora rabbits. Such breeds include, French, German, Giant, English, Satin, Chinese, Swiss, Finnish, to name a few. As pets they are playful, active and are said to have a fun personality. The rabbits pluck their own wool and eat it so it is considered a must after every ninety days to shear or pluck them as their stomach and intestines will get blocked up with wool and they will starve as there is nothing else to eat.
Labels: Weird and Wonderful Animals