The Man Who Turned Blue! 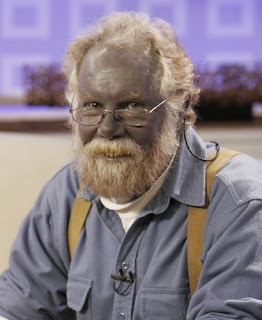 Paul Karason, a 57 yearl old man from California in the United States, has turned blue. Karason’s skin started turning blue nearly 10 years ago when he used a used a silver preparation to treat a bad case of dermatitis on his face that broke out due to stress when his father died. The condition he has is called argyria and is caused by the silver that Karason used to treat his dermatitis and has been drinking in a liquid form called colloidal silver on and off for some 14 years. Colloidal silver is a suspension of silver in a liquid base — in this case, distilled water. Karason makes it himself by running an electrical current through water with a piece of silver in it, a process called electrolysis.

Silver has antibacterial properties and has been used to fight infection for thousands of years, even by Roman soldiers. But it went out of use with the development of antibiotics, which are far more effective. It continued to be used in some over-the-counter medicines until 1999, when the Federal Drug Administration in the US banned it because it causes argyria, which is a result of the silver reacting with light the same way it does in photography. The silver collects in the skin and other organs and does not dissipate. Mr Karson is in good health, but ironically, his dermatitis was not cured by the silver. The condition is not reversible.