NRG1 – The Human Genome Project Throws Up An Anti-Cancer Gene 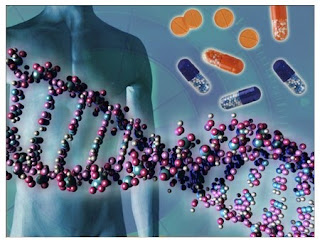 A recent report by Paul Edwards, a molecular biologist in Cambridge University, has suggested that a major cause of many breast cancers and some colon, prostate, ovarian and bladder cancers appears to be the absence of a particular gene called NRG1 - which is carried on chromosome 8 and normally suppresses the growth of cancer cells.

The causes of cancer include viruses, radiation, smoking and certain chemicals, but scientists have known since the 1970s that some cancers can be caused due to the absence of particular genes. Edwards and his team looked at tissues from 54 breast tumours and found that part of chromosome 8 was missing in more than half of them. After cross-checking against results from the Human Genome Project they were able to identify the gene that was lost. Research into how the damage to chromosome 8 is caused is ongoing.
The research has been funded by the Breast Cancer Campaign and Cancer Research UK.
Labels: Biology Stuff Human Body Medicine Today's Science News