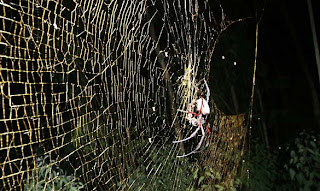 During a scientific expedition to Africa and Madagascar the largest web spinning spider in the world, Nephila komaci, was recently discovered. Only the females of this group of species are giants, with a leg span of up to 12 cm, while the male spiders are tiny by comparison. Scientists say the female spiders are capable of spinning webs that reach up to 1 m in diameter. The spiders belong to a group of arachnids called Orb Spiders. Orb spiders are a widespread group which take their name from the round webs they typically spin. The new spider was identified by Matjaz Kuntner, a biologist from the Slovenian Academy of Sciences and Arts, and his colleague Jonathan Coddington, from the Smithsonian Institution's National Museum of Natural History in Washington DC.
Labels: Today's Science News