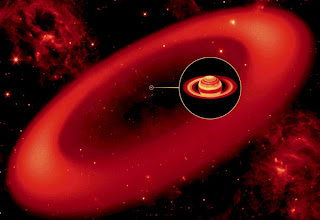 Scientists have discovered a new dark ring around Saturn, which is the largest known planetary ring in the solar system. NASA's Cassini spacecraft spotted the faint ring on September 17 when the sun passed behind Saturn, providing a bright backlight for the planet's ring system. Scientists think the new ring is made from dust-size particles kicked up as comets and other space debris slam into Saturn's outer moon Phoebe. If the new ring were visible from Earth, it would look twice as wide as the full moon. Saturn’s rings were first discovered almost exactly 400 years ago by Galileo Galilei and are visible with even the smallest telescopes, but this ring is only visible in the infra-red light. The new ring could explain a long-standing mystery about the strange two-tone colouration of Phoebe's neighbor Iapetus, another Saturn moon. Half of walnut-shaped Iapetus is icy and bright. The other half appears to be covered in a soot-like material of mysterious origin. Now the researchers think the dark coating comes from particles from the newly discovered ring.
Labels: Astronomy Today's Science News