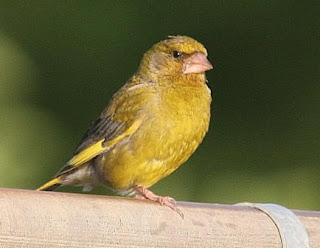 The following is an extract from a very interesting article from today's Irish Times.

A DISEASE which cannot be controlled in the wild is killing off one of Ireland’s most popular garden birds, the greenfinch. While trichomoniasis, caused by the parasitic trichomonad organism, has been hitting all bird populations, greenfinches have been the species most affected. The parasite lives in the bird’s upper digestive tract, its actions progressively blocking the bird’s throat, making it unable to swallow, thus killing it by starvation.

According to Oran O’Sullivan of BirdWatch Ireland, its records have shown greenfinches have declined from 7th to 10th place in the most commonly observed birds in gardens. “This is the most accurate indication we have of falling numbers and we are concerned about what is happening, especially when the disease cannot be controlled in the wild.” The disease was first noticed about four years ago when Birdwatch began receiving reports of garden birds dying. The main outbreaks are during the late summer and autumn, but there are already signs of an outbreak in 2009.... click here to see more.