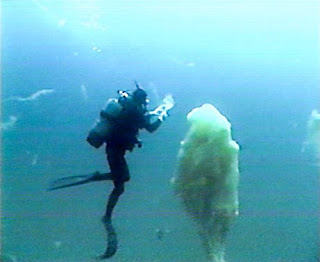 Reports from the Mediterranean are that the amount of giant sea mucus is on the increase. These giant blobs of slime contain a cocktail of bacteria and viruses, which potentially harbour disease that could affect fish, swimmers and other marine wildlife. Enormous sheets of such mucus occur naturally throughout the Mediterranean, especially in the Adriatic. But in recent years, as sea temperatures have risen, these sea congregations are exploding in number and size - sometimes stretching over hundreds of kilometers, generally near coastlines. A mucilage begins as "marine snow", clusters of mostly microscopic dead and living organic matter, including some life-forms visible to the naked eye—small crustaceans such as shrimp and copepods for example. Over time, the snow picks up other tiny hitchhikers, looking for a meal or safety in numbers, and may grow into a mucilage. Below is a video from National Geographic.
Labels: Marine Biology Today's Science News

Geo Moriarty said…
I would NOT want to be the diver swimming through those blobs.
3:46 am