Last Tuesday a group of French palaeontologists revealed the discovery of the largest fossilised footprints ever found. The footprints are of a 40 tonne sauropod dinosaur and were found in April of this year near Lyon. (Sauropods are very large herbivorous dinosaurs of the Jurassic and Cretaceous Periods, having a small head a long neck and tail and five-toed limbs). Some of the footprints span over one and a half metres in width. The footprints are circular depressions in Upper Jurassic chalky sediments (around 150 million years old), made when the area was covered by a warm, shallow sea.
Even though these are the biggest footprints ever discovered, many animals would have left even larger footprints. Dinosaurs like Amphicoelias fragillimus or Argentinosaurus (an artist's impression is shown below), were thought to exceed 100 tonnes (about the same as 40 Asian Elephants) and would have been 40 to 60 metres in length. 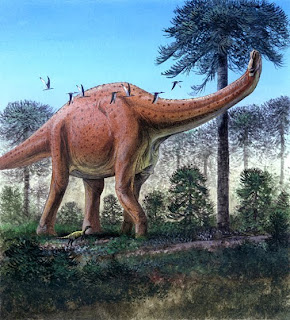