Ardi - The Mother of Humanity? 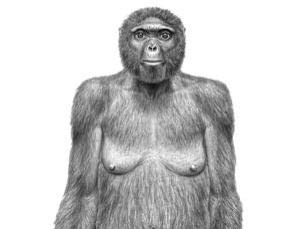 The remains of a woman who lived and died at the dawn of humanity have been uncovered in Ethiopia, giving the clearest picture yet of the origin of our species. The partial skeleton, the oldest from a human ancestor ever ­discovered, belonged to a female who walked on two legs but was adept at climbing trees and moving through the forest canopy some 4.4m years ago (1.2 million years before Lucy). Experts have described the find as the most important regarding human evolution in the past century. The woman, named Ardi by the researchers who worked on her, belongs to the species Ardipithecus ramidus and may be the earliest human ancestor ever discovered that was capable of walking upright. The finding sheds light on a critical but unknown period of evolution at the root of the human family tree, shortly after our ancestors split from chimpanzees more than 6m years ago.
Ardi stood four feet (1.2 m) tall and weighed a little under eight stone (50 kg), making her similar in size and weight to a living chimpanzee. But many of Ardi's features are far more primitive than those seen in modern apes, suggesting chimpanzees and gorillas have evolved considerably after they split from the common ancestor they shared with humans. The discovery of Ardi provides vital clues about the earliest human ancestor that lived at the fork in the evolutionary road that led to humans on one side and chimps on the other.