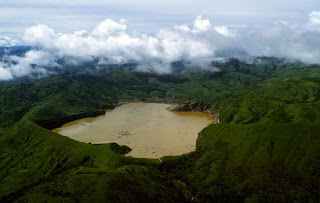 Lake Nyos is a crater lake, located in an apparently idyllic spot in Cameroon's north-west province. A lake two kilometres long, it sits high on the flanks of an inactive volcano in the Oku volcanic plain. Quiet and warm, it is surrounded by granite cliffs, corn fields and steep grassy slopes. But carbon dioxide (CO2), a by-product of volcanic activity in the rocks beneath, seeps constantly into the depths of Nyos, 200 metres below the surface.

A pocket of magma lies beneath the lake and leaks CO2 into the water, changing it into carbonic acid. Nyos is one of only three known lakes to be saturated with carbon dioxide in this way, the others being Lake Monoun, at a distance of 100 km south, and Lake Kivu in Rwanda. It took many years of study for the science community to agree that the origin of CO2 within Lake Nyos is due to CO2 that rises from volcanic activity.

As the CO2 dissolves into ground waters, it is transferred to the lake resulting in the slow saturation of the hypolimnion (the dense, bottom layer of water in a thermally-stratified lake). In most crater lakes, turnover of the stratified waters occurs periodically and harmless amounts of dissolved gases are released; however, the problem with Lake Nyos and Lake Monoun is that these two particular lakes do not periodically turn over. Thus, dissolved gases are allowed to reach much higher concentrations.

On the 21st August in 1986, possibly triggered by a landslide, the lake emitted a large cloud of CO2 which was responsible for the deaths of 1,700 people and 3,500 livestock within a 15 km radius. Though not completely unprecedented, it was the first known large-scale asphyxiation caused by a natural event. To prevent a repetition, a degassing tube that syphons water from the bottom layers of water to the top allowing the carbon dioxide to leak in safe quantities was installed in 2001. Today, this lake holds the place in the Guinness book of records as the ‘Worlds’ Deadliest Lake’.

Labels: Science Fact of the Week