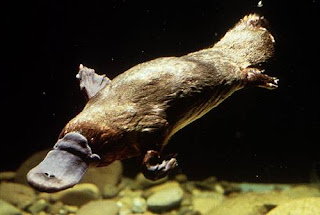 The Duck-billed Platypus, Ornithorhynchus anatinus, is a primitive Australian mammal that lays eggs. They have a muzzle shaped like the bill of a duck, webbed feet, and a tail like that of a beaver. The bill is not hard like that of a bird, but leathery. The bill and feet of a platypus are black while the fur is usually a dark brown colour. The platypus is one of only two mammals that do not give birth to live young but lays eggs instead (the other is the Echidna, a spiny ant-eater, of which there are 2 species). After birth, the young (called puggles) live on milk provided by the mother. However, the platypus does not have nipples. Instead, glands along the side of the mother secrete milk and the young puggles lap it up. This is what makes the platypus a mammal, the fact that it feeds its young with milk. Platypuses generally have a life span of 10-17 years. They live in burrows and spend much of their time in freshwater ponds and streams.
The platypus is about the size of a domestic cat. It has thick, waterproof fur all over its body. The legs sprawl out to the side of the body, giving it a lizard-like walk. Males are actually venomous - they have a poisoned spike on their ankles which the platypus can use to kill small animals in self-defence. They are carnivores (they eat meat) and use their bills to strain tiny prey, like crayfish, worms, insects, snails, and shrimp from muddy water. The platypus can store food in cheek pouches while it is hunting underwater. Interestingly, the platypus has an electro-sensitive bill which can detect the tiny electrical currents given off by its prey. They also have excellent senses of sight and hearing. They are protected by Australian law and are not thought to be in danger of extinction, despite being easily affected by pollution.
Labels: Mammalia Science Fact of the Week