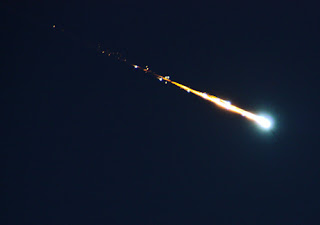 A new picture has emerged of the fireball meteor which zipped across the skies of the Netherlands last Tuesday evening before exploding in to the North Sea. Many people in the Netherlands witnessed a large “fireball” meteor in the sky. Observations indicate that the orbit of the meteor came from south to north. Further research is being carried out about the precise path of the meteor. It is not sure what damage, if any, would have been caused if the meteor had hit land. Earth is constantly being bombarded by smaller debris from comets, asteroids, and even other rocky planets in the solar system. But a fireball of this size and brightness is likely to be seen anywhere in the world only every 20 to 25 years.