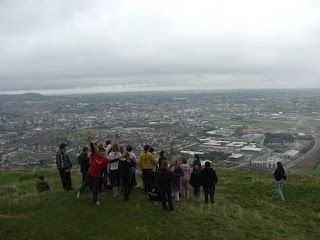 The members of the First Form returned on Saturday afternoon after a busy few days exploring the many areas of scientific interest in Belfast and on the Ards Penninsula. The pupils visited a number of attractions over the three days. In W5 in Belfast, the pupils explored various exhibitions centred on topics like magnetism, dinosaurs, energy, forensics and much more. At Scrabo Tower, the pupils were able to discover the geological influences that shape that area and to look out for Peregrine Falcons. In Castle Espie, the pupils discovered the wide range of birds native to Strangford Lough and learnt more about their migratory habits. In Grey Abbey, the pupils learned how the monks in the abbey grew their own herbs and used them for medicines. The pupils also visited Exploris, Northern Ireland's only aquarium and seal sanctuary. There, they got their fingers wet in the touch tank and learned about how marine life adapts to the environment. Finally, on Saturday morning the pupils visited the Ulster Transport Museum, where they explored the evolution of transport in Ireland, from bicycles to steam engines to the modern motor car.

The expedition was a great success, and a great time was had by all. Over the next week or so, the pupils will be completing a project on their trip, focussing on their particular areas of interest. Tomorrow, we will post a slideshow of photos from the trip!
Labels: Science Trip Reports