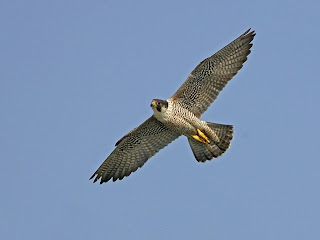 The Peregrine is a large, powerful falcon that is quite widespread in the Northern British Isles. Coastal cliffs, mountain crags and open moorland are its preferred hunting grounds, although they are increasingly being found in cities. Its black hood distinguishes the peregrine from other similar sized falcons. Adult birds have slate coloured upper parts with grey barring below. The preferred method of hunting for the peregrine is to circle high overhead and then descend onto its prey in an action referred to as the "stoop." Medium sized passerines such as thrushes and starlings, wood pigeons, domestic pigeons, gulls, waders and game birds form the main staples in the Peregrine's diet. Peregrine numbers in Ireland are on the increase. The Republic of Ireland Peregrine population is estimated to be 265 breeding pairs and Northern Ireland appears to have 100 breeding pairs. Peregrine Falcons do not build nests but lay their eggs on ledges of sea or inland cliffs or quarries, in old raven nests, on tall building ledges or in church spires. They generally lay between three and five eggs which incubate for approximately 30 days. The Peregrine Falcon is a very fast flier, averaging 40-55 km/h (25-34 mph) in traveling flight, and reaching speeds up to 112 km/h (69 mph) in direct pursuit of prey. During its spectacular hunting stoop from heights of over 1 km, the peregrine may reach speeds of 320 km/h (200 mph) as it drops toward its prey. The Peregrine Falcon is one of the most widespread birds in the world. It is found on all continents except Antarctica, and on many oceanic islands.
Labels: Ireland's Birds of Prey Ireland's Fauna