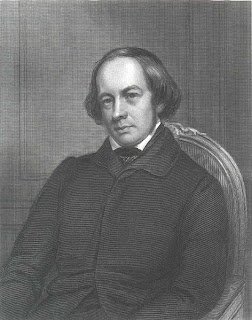 Robert Kane, the eminent Irish chemist, was born in Dublin on 24th September 1809. His father John Keane had been involved in the 1798 rebellion against British rule by the United Irishmen (led by Wolfe Tone) – and had to flee to France afterwards, where he studied chemistry in Paris. On returning to Dublin in 1804 John changed his name and set up the ‘Kane’ chemical factory, manufacturing sulphuric acid amongst other things.
Robert was brought up at 48, Henry Street – near his father’s factory, which no doubt helped him to gain an early interest in chemistry. He entered Trinity College Dublin in 1826 to study medicine, but maintained his interest in chemistry and 2 years later, at the age of 19, he published his first academic paper, "Observations on the Existence of Chlorine in the Native Peroxide of Manganese". In 1830, following in his father’s footsteps, he moved to Paris to study pharmacy. In 1831, at the age of 22, Kane returned to Dublin and published his first book Elements of Practical Pharmacy. In the same year he accepted the post of professor of chemistry at the Apothecaries' Hall in Dublin, was elected to the Royal Irish Academy, and founded the Dublin Journal of Medical and Chemical Science. Kane continued to publish on a wide variety of chemical topics, helping to uncover the nature of acids, the electropositive nature of hydrogen, and the existence of the ethyl radical. In 1834 he took up a new post as lecturer and then professor of Natural Philosophy at the Royal Dublin Society, and in 1836 spent some time in Germany working with Liebig in his laboratory in Giessen (about 30 miles north of Frankfurt).
Between 1841 and 1843 Kane produced his massive treatise The Elements of Chemistry, and in 1844 he produced his most famous work The Industrial Resources of Ireland, and was awarded the Cunningham Gold Medal by the Royal Irish Academy. In 1845 Sir Robert Peel appointed Kane as director of his newly established Museum of Economic Geology in Dublin, and then appointed him President of Queen's College Cork (the other constituent colleges of the Queen's University being Galway and Belfast) – now University College Cork.
1845 marked the start of the Potato Famine, and Kane became one of the 8 Relief Commissioners, as well as a member of the Board of Health (looking at an outbreak of typhus), and a member of the Commission set up to investigate the causes of the blight. Although he was knighted in 1846 and elected a Fellow of the Royal Society of London in 1849 – at least partially for his work on litmus as a pH indicator, he seemed to lose some of his drive and interest after the famine, and in 1853 there was an official enquiry into his prolonged absences from Queen’s College Cork (it seems he was often in Dublin with his family).
Kane retired in 1873, taking up the post of National Commissioner for Education and then becoming President of the Royal Irish Academy in 1877 – until his death on February 16th 1890. Kane was a rounded and highly cultured man and an extremely able linguist, and he was an early champion of the important role that science has to play in a fully rounded education.
"Should an ambitious parent desire to give his son a good education, although he is to be in trade, he puts him through College. He devotes the best years of his youth to reading Grecian poetry, and Latin plays, to learning by rote the dialectics of the middle ages and principles of abstract metaphysics, and awakens, after the solemnity of getting his degree, to find that he is to obtain his living by principles and pursuits to which his education has had no reference whatsoever."
Labels: Chemistry Stuff Famous Irish Scientists People in Science