The Search for Lunar Water 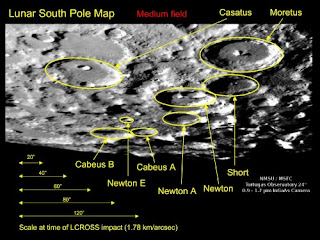 NASA's Lunar Crater Observation and Sensing Satellite (LCROSS) is racing toward a double-impact on the moon at 7:30 am EDT on the 9th October. On the 11th September NASA announced exactly where the crash will take place. The target crater is Cabeus A. It was selected after an extensive review of the best places to excavate frozen water at the lunar south pole.

LCROSS will search for ice by plunging its spent upper-stage Centaur rocket into the permanent shadows of Cabeus A, where water might be trapped in frozen form. The LCROSS satellite will then fly into the plume of debris kicked up by the impact and measure the properties of the plume before it also collides with the lunar surface. The LCROSS team selected ‘Cabeus A’ based on a number of conditions, including -:
Professional astronomers will use many of Earth's most capable observatories to monitor the impacts including the Infrared Telescope Facility and Keck telescope in Hawaii; the Magdalena Ridge and Apache Ridge observatories in New Mexico and the MMT observatory in Arizona; the newly refurbished Hubble Space Telescope; and the Lunar Reconnaissance Orbiter.
The LCROSS mission has been dedicated to the memory of Walter Cronkite, who covered NASA missions from Mercury through the space shuttle.
Labels: Astronomy