Peter Artedi and the Work of Linnaeus 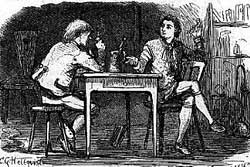 Although Leaving Certificate Biology students across the country are always told that Linnaeus was responsible for our system of naming and classifying organisms, it seems that this is not quite the whole story. Nicola McGirr, writing in Nature’s Connections (London Natural History Museum), tells us that it was Peter Artedi (1705 – 1735), a friend of Linnaeus, who first started using 'binomial nomenclature' for naming species of plants in the Family Umbelliferaceae (cow parsley etc.).

Artedi’s work has largely been forgotten due to his untimely death at the age of 30 when he fell into a canal and drowned in Amsterdam when on the way home after a meal. Linnaeus was devastated by the death and helped to posthumously publish Artedi’s work The Natural History of Fishes in 1736. This work contained the classification system that Linnaeus used to classify plants in 1753 in Species Plantarum, and which he subsequently used in classifying animals in 1758 in Systema Naturae. At the time Linnaeus paid tribute to the work of his friend, but over the years Artedi’s name has been forgotten and Linnaeus stands alone as 'the father of classification'. In fact, although Artedi and Linnaeus introduced the concept of generic names, it seems to have been Linnaeus’s students who started to use specific names, to speed up their work in the field.

Here lies poor Artedi, in foreign land pyx'd
Not a man nor a fish, but something betwixt,
Not a man, for his life among fishes he passed,
Not a fish, for he perished by water at last.
Labels: Biology Stuff People in Science